IT looks like Jeep have got the point with their all new Compass…..

Its predecessor didn’t really set the world alight when it launched into the soft roader sector of the UK market, but the latest version seems a bit more intent on putting the tribulations of the past firmly in the past.

Those of us with long memories and dates from a past century on our passports will possibly think of American GIs smoking huge cee-gars and hanging onto the top of the windscreen for dear life at the mention of the word Jeep.

It was the practical, utilitarian vehicle of the 1940s that helped to rout Johnny Bosch and help win the second world war for the Allies. A brand that gave us – and the Germans – the WW2 Willys…..

Well, there’s nothing utilitarian about the Compass circa 2018. You can have diesel or petrol, two or four wheel drive and a reasonable choice of trim levels. An ideal shopping basket when you’re up against the likes of the best selling SEAT Ateca, Nissan Qashqai, Skoda’s pretty decent Karoq, and let’s throw the Mazda CX-3 in there too. All very tough competitors, and all pretty decent to look at.

So is the Compass. It’s got those trademark squared off wheel arches that make a Jeep very much a Jeep, and there’s a distinctive chrome line running from the windscreen pillar up and along the roofline before plunging down and round the lower edge of the rear screen. A nice touch and very noticeable, as is the distinctive Jeep grille. 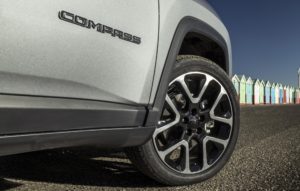 It’s got a softer feel to it that the Renegade or even Cherokee and maybe there’s no real link back to the heritage of the cars that have gone before. Little touches like the etching on the screen of the Renegade depicting the car on a steep slope, for instance.

But then this is a car aimed at the UK and European markets and has to appeal to a differing set of emotions when people wander into a showroom. They want something they can recognise as a family vehicle, and not necessarily something that’s at home in the wilds of Arizona.

And that’s why you’ll find a relatively modest Fiat group powerplant under the bonnet in the shape of the 1600cc MultiJet, which is hard to fault for its efficiency. A combined 64.2 is quoted and it’s quick enough through the gears to keep up with any fast moving traffic you might be in. Get first gear out of the way and it pulls well up the range and for a modest sized diesel is not too audibly encroaching at cruising speed. 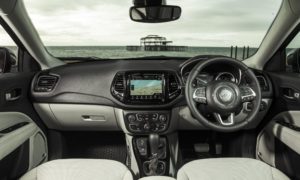 It’s a car that teaches you to use your indicators. Otherwise the lane departure warning system builds resistance into the steering. You can turn it off (I did) and it has a habit of making the steering go momentarily light and vague when you don’t want it to. And that’s at any time. Switching the system off alleviates that, as it does on many cars, like my own Ateca.

You can pretty well guarantee you won’t hit anything in a Compass as its early warning system of bleeps start chattering away when you’re within a nautical mile of anything solid. Even humans, and there are plenty of solid ones where we lives….

It’s well equipped in Limited trim, and while the sat nav screen might not tell you what your dog had for dinner on Easter Sunday 10 years ago, there’s still plenty of useful and informative info to access on it.

FOR: not one of the mainstream
AGAINST: up against the best