KIA are rapidly turning into the Kelloggs of the motor industry – a ‘cereal’ car producer, if you like.

It’s the sheer ‘Variety’ of cars on offer that earns them the tag. Not content with three body styles for the Ceed range (hatchback, Sportswagon and ProCeed) there’s now another.

Enter the XCeed, cunningly aimed to attract those of us here in the UK who are shunning the traditional hatchback in favour of the wide variety of crossovers and SUVs filling showrooms up and down the country.

So XCeed gives you another option and it’s certainly a sporty looking alternative and offers the cabin and luggage space of an SUV in what is a pretty compact body.

To mark the slight difference Kia call it their CUV – crossover utility vehicle – and it joins a line-up that already includes the Stonic, Niro and Sportage.

Although it’s based on the same platform as the Ceed hatchback, the two cars only share their front door panels – the rest of XCeed has been redesigned and tweaked to give it a more sloping roofline and a sportier look. In profile it has a sporty, swept back silhouette, and it has a new look to the front ‘face’, but its front and rear overhangs are actually a bit longer than the five door hatch. Archetypal SUV roof rails add to the image. 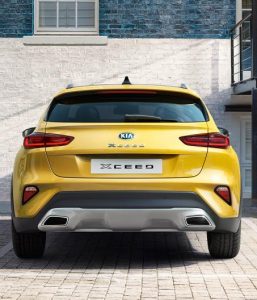 Ground clearance has been increased by up to 42mm, not too much to unsettle it through corners as might be the case in some taller SUVs. But despite a bit of extra bodywork, some light off-roading is all you’ll manage. This is a car all about its looks and not exceeding (!) expectations.

It handles like a hatchback which is no bad thing because the Ceed on which it’s based has a reputation to uphold in that department. As well as practicality and efficiency.

Space inside is good and there’s a healthy amount of luggage capacity (over 30 litres more than the standard Ceed, despite XCeed’s more rakish tailgate), and the dash area has that neat user-friendliness that is a hallmark of a 21st century Kia. Level 2 has a decent amount of equipment, including s reversing camera, but you’ll need to use your Apple CarPlay or Android Auto for sat nav. 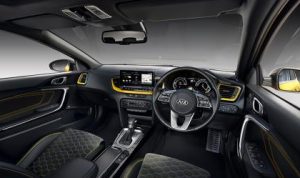 Sampled here is the three cylinder 1.0 litre T-GDi with six speed manual gearbox. A lusty little unit, with a decent amount of power, you might find a little icon on the dash ahead of you reminding you to change up a gear or two. With a decent amount of torque available it’ll happily do its thing and perform in pretty well any gear you care to leave it in, but for the sake of outright economy that little telltale is there to prompt you.

The buzz from the three cylinder engine is always there but even on a motorway cruise didn’t prove intrusive.

Price wise, a comparable level Ceed hatchback is around £2,000 cheaper than the XCeed, or put another way, a lot of the same for less outlay, so will the heart overrule the head?