NISSAN’S Juke is a car that stands out from the crowd in any scenario – even before you throw a few litres of bright paint at it.

They even made sure the windows were open, because some of the latest ones have got a tango coloured coating inside too.

It’s quirky looks in its compact chunky body have made it a popular choice for those motorists who stray from the conventional. And there must be a lot of them about, because there are a lot of Jukes about too. 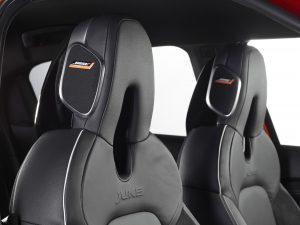 Of the one million produced thus far, nearly 300,000 of them are plying the highways and byways of the UK.
It was the first small pumped up SUV with just one rival when it went on sale in 2010. Now, 24 competitors are ranged against it so it’s been a case of upping the game for the latest model.

Cue Nissan’s European Technical Centre at Cranfield, where much work has gone on behind closed doors to iron out any small imperfections and to make its driveability more in tune with British roads.

That included some exhaustive development on the way it tackles roundabouts – a major feature of our road network but something which curiously does not exist in Nissan’s Japanese homeland.

Engine here is the 1.0 litre DIG-T three cylinder, which has a useful 10 second overboost to enhance safe overtaking. It certainly doesn’t feel out of place and also performs with reasonable efficiency when coupled with the seven speed DCT transmission.

With the B sector crossover market expected to continue growing by some 30 per cent in the next three years, Nissan have put a lot of effort – and kit – into the new Juke to keep it at the forefront of buyers minds. 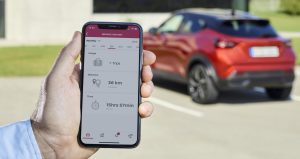 Lots of technology and connectivity feature in the new car, like linking it to your smartphone where Google connectivity will allow you to check your fuel level before you even leave the house.

Standard features include heated front and rear screens, ambient lighting, a steering wheel that now adjusts for rake and reach, a BOSE Personal Plus audio system with speakers in the headrests and an intelligent around view monitor. And there are many ways to personalise the car to your own taste.

Higher quality materials have found their place throughout the Juke, and while it’s a tad bigger, which means it’s a tad roomier, it’s also a tad lighter than its predecessor.

The boot now has a wider opening thanks to the redesign and the boot space is increased from 354 litres to 422 litres. 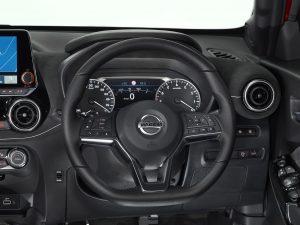 You can’t truly make up your mind till you’ve walked round a car and taken in the curves, bulges and swoops that make up its outer coating. A picture might well be worth a thousand words, but is no substitute for the picture that forms in your mind on true first acquaintance.

And on first acquaintance, the new Juke proves to be a bit less of a marmite car than its predecessor. The lines seems a little more subdued, or it could be that we’re just more accustomed to its quirky looks now.