EVER needed proof that slapping a big black number on a white circle and hooning round a racetrack improves what you and I get into to go to work on a Monday morning?

Take a look at Honda’s neat Civic, a car that took Gordon Shedden to the British Touring Car Championship last year – and his team mate Matt Neal to the same title 12 months before if my memory serves.

The shape is the same, but there are of course many differences under the silhouette of the racer.

But to be good on the track the car has to have certain basic attributes to aid that success. And the road going Civic has the vital ingredient of an excellent chassis that translates to a ride with very little body roll and handling that is precision personified.

It’ll zip confidently round roundabouts and dispenses with country lanes without ever feeling over-stretched.

It has a set of highly efficient brakes and a peppy engine that is always on the button. But we’re not talking high performance version here – the one under scrutiny is the entry level SE Civic with a 1.6 litre diesel engine.

Not just any old 1600 though. This is a new chapter in the history of Honda diesel engines and the new 1.6 litre I-DTEC is the first to be launched in Europe under Honda’s Earth Dreams Technology environmental programme. And it’s a cracker, with pick up and acceleration that is a credit to the engineers who designed it and put it all together.

What you get is a car with good fuel economy, low emissions and pretty decent performance. It has a CO2 figure of 94g/km, so no tax, and a claimed combined mpg figure of 78.5. Safe to say I got nowhere near that, but then I wasn’t really trying, so under the circumstances a recorded 58.2 isn’t that bad at all. As my school reports used to say, could do better.

It’s an engine that has been developed for Europe and as with the car itself its built here at Honda’s Swindon factory.

Civic looks stubby and short, probably because It looks quite tall as well, but it is surprisingly roomy, and has that trademark space age dash and yes, it still has that annoying bar across the rear hatch window. And a wiper that only clears the top portion. 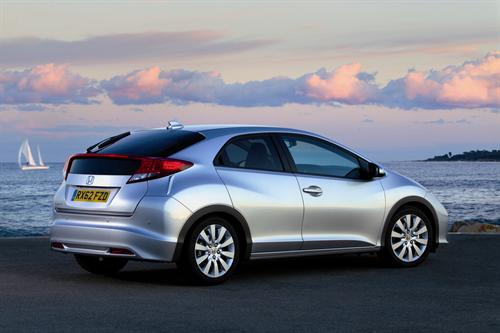 The specification sheet describes the bits you sit on as magic seats and they certainly conjure up (!) a lot of comfort and support. Sitting ahead of you is a clear and easy to see digital speedo with lights either side that change in colour depending on the weight of your right foot. Green is good, deep blue not so.

The shape of the Civic is certainly distinctive, evolving here and there from the original into the current sharp suit of clothes.