FOUR-time Formula One World Champion Sebastian Vettel played an active role in the testing and evaluation programme of Infiniti’s new  Q50 in his capacity of Infiniti’s Director of Performance.

So he was likely to be totally nonplussed by the fact the car brings to motorists a world-first steer-by-wire system – or to put it another way, a system with no physical link between the road and the steering wheel. 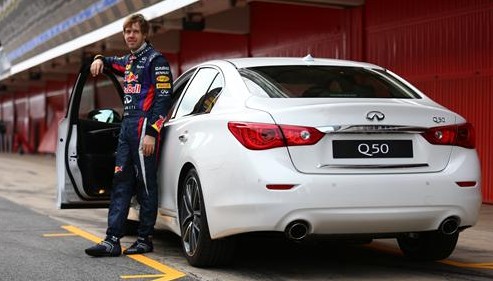 Now, you might be adopting a different train of thought to the young German (right) here. I know I did. Computer controlled steering? Something along the lines of a giant leap of faith to get behind the wheel of a car with that, you’re thinking.

But Infiniti claim it works faster than a traditional mechanical set up. And having driven the thing, I’m still alive to tell the tale that yes, it does work. There’s a heavy, firm feel to your inputs (which get positively shoulder wrenching if you’re fool enough to select the Sport drive mode) but it’s maybe the first step along a road that they say will lead to driverless cars in the future…

The Japanese luxury manufacturer is more than 25 years old, but it has only had an official presence in Europe since 2008. And it’s still working on it….

The fact that Infiniti has yet to fully register with the British motoring public could be down to its relatively small dealer network, but ask any fan of F1 and they’ll be fully aware of the brand. As are most of the drivers, as they’ve been staring at the rear end of one as they’ve followed in Sebby’s wake round the world’s racetracks for the past four years. OK, not quite an Infiniti, but the by-product of a cute bit of brand imaging.

The Q50 Infiniti is a better proposition than the G37 it’s picking up the baton from, and comes in a hybrid version, which couples a 306ps 3.5-litre petrol V6 petrol to a 67bhp electric motor. Output from the pair is sent through a seven-speed automatic transmission to the rear or, optionally, all four wheels.

Q50s with the hybrid system can operate in pure electric mode, which helps them deliver a claimed combined average of 45.6mpg along with 144g/km of CO2 emissions.

There’s a lot to like. It offers a sensible blend of pace, economy and performance, while proving fairly smooth and effective in operation. Off the line it’s effortless, with the electrified powertrain permitting the V6 to shut off regularly and for extended periods, as experienced on a traffic packed trip down to Gloucestershire..

The curvy styling is likely to be a decisive factor in enticing new customers. It makes Q50 stand out quite effectively from its rivals. It’s a given that the look of a car should attract admiring glances and this one certainly does. It has a strong purposeful look, which in some way helps to mask the fact this is a big piece of metal. 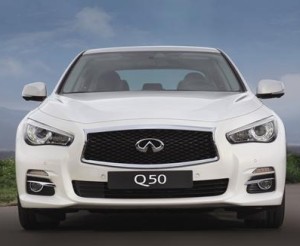 And while it might have its origins on saggy old America the Infiniti has been re-tuned for European roads and driving conditions, and someone’s done a good job of it.

The suspension errs on the firm side, but the gadgetry gives you good feedback, so much so that when the roads are wetter than a haddock’s bathing costume, you know the instant the big 19 inch alloys at the back end detach from the tarmac. 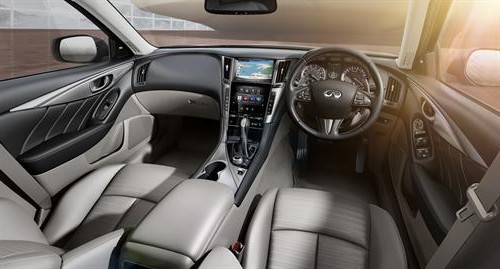 The dashboard is dominated by dual LCD screens, highly legible, and, everything else – switchgear, vents – has been swept aside for the seven-inch and eight-inch displays in the centre stack. The top screen deals mostly with the sat-nav display and parking cameras, while the lower one controls other functions, like the Infiniti Drive Mode Selector.

Most features can be accessed from both displays and controlled via voice, button and fingertip input.

The V6 is suitably evocative when it revs, and it’s hard to gloss over the impressive quoted figures; Infiniti says the hybrid will do 0-62mph in 5.1sec (it certainly feels like it) and reach 155mph.

It’ll do that, however, yet still be capable of potentially averaging 45.6mpg and emitting a reasonable 144g/km of CO2. Which for a car with this level of performance is impressive indeed. 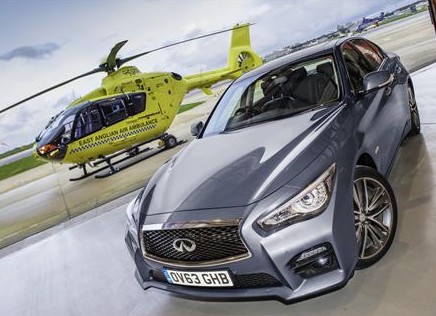