THERE’S a good chance that the hugely popular VW Tiguan could see a surge in sales, even during the current restrictive pandemic.

With more and more of us eschewing the sunny destinations of the past in favour of staycations in the UK, leisure vehicles like caravans are being snapped up almost as soon as they arrive on dealer forecourts.

And to tow a caravan you need a decent towcar, which is where the Tiguan lays its cards on the table.

With a variety of engine sizes, trims, and with four wheel drive available, it’s always been one that can tick the ‘capable’ and ‘able’ boxes.

Under scrutiny here is the 1.5 litre TSI 150 in Life trim, expected to the most popular choice. Weighing in with a kerbweight of 1510kgs, it’s more than capable of safely lugging one of the modern lightweight touring caravans along behind it. As long as you’re driving safely, of course.

A modest (for today’s standards) 0-62mph time of a fraction under 10 seconds belies the fact that the 1.5 four cylinder turbocharged unit has a healthy 184lb/ft (250Nm) of torque. It also has cylinder deactivation and thus run on two cylinders under certain loads, which lowers emissions and improves fuel economy.

More and more motorists are hankering after a car that looks like a big SUV but is more compact in size so actually isn’t. This one is the classy option.

Tiguan has been part of Volkswagen’s lineup since 2007 and has been one of their most successful global models.

Now the second generation that went on sale in 2016 has had a major upgrade – there’s a completely redesigned front end with new LED headlights and a bonnet that extends over the distinctive radiator grille, and at the rear the model name is now sited centrally below the new VW roundel. 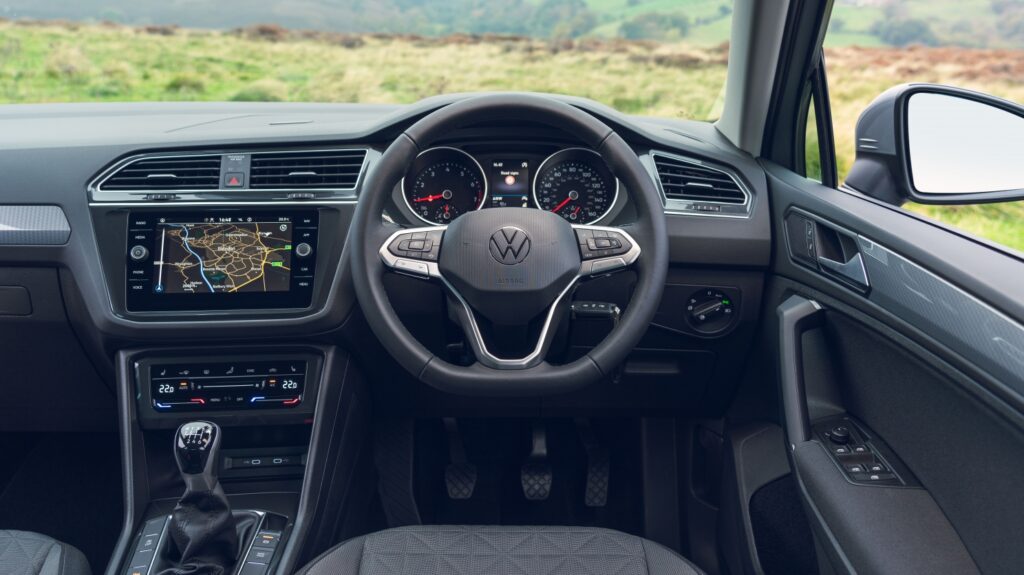 All the bases have been touched and ticked – safety, styling, space, technology, engineering, performance and economy – so the perceived improvement is not just visual.

It’s a given that it has predictable handling and it copes well with your British Standard Pothole without causing too much grief for those inside.

Steering is very light to the touch but not in any sense vague, and the overall feel is that it is quite softly sprung, meaning there’s a relaxing waft to forward progress.

Instrumentation is clear logical, easy to read and very user friendly, and with very comfortable seats that offer plenty of support in all the right places.

And for the internet generation of car buyers, it also has the required array of apps available via its onboard communication system.

There’s also a new digitised control unit for the air conditioning, which has touch panels and sliders in gloss black to make changes to the interior climate.

There’s more room inside than before as well so less need to squeeze people in. Trim levels are Tiguan, Life, Elegance and R-Line, and choice of diesel and petrol engines.

Quality comes at a premium of course, and Tiguan ownership will set you back more than some of its immediate competitors like the SEAT Ateca, which is also built on the MQB platform but which costs less of your hard earned.

But sitting in the chunkiness of a Tiguan gives you that extra bit of reassurance when one of our foreign lorry driving brethren decides to change lanes with less warning than the US navy got at Pearl Harbour.