TO earn the title of King of the Circuit a car has to be a bit special. The Type R GT is such a car.

And not just on the daunting Nurburgring Nordschleife track – the Honda has also taken front wheel drive lap records across the world from Bathurst in Australia and Suzuka in Japan to closer to home circuits at Estoril, Spa, Magny Cours and our own Silverstone.

So no slouch then. It’s not just Red Bull – Honda gives you wings too, in the shape of the over large attachment on the bootlid of the latest Civic Type R GT, which does its bit to keep it glued to the black stuff. In fact there are as many other bulging body bits as you’ll find on your average Anthony Joshua.

It’s a bit of a ‘splash some water in your face‘ moment when you peruse the statistics and absorb the fact it’s ‘just’ a 2.0 litre engine powering things. 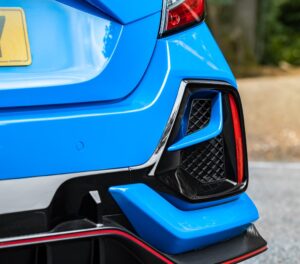 Not just any 2.0 litre engine, but a heavily breathed on and tweaked Honda VTEC engine.

In it’s latest guise it develops 315bhp and a thumping 295lb/ft of torque, which help to propel it along at what most would accept is a fair pace.

I’ve always felt there’s something very sobering about knocking along at the legal limit and realising the hatchback you’re in will do twice that speed. And then some. Its top speed now rests at 169mph.

But briefly back to the figures. The stark fact is that this bewinged piece of Japanese engineering with its massive rear spoiler can accelerate to 62mph in around the same time as a lot of more exotic machinery. 5.8 seconds to be precise.

It doesn’t take many miles behind the Alcantara-clad wheel to deduce that to get the best out of this race car for the road you don’t need a road at all. You need a track day, where you can play to your heart’s content and not risk anyone else’s well-being should the unfortunate happen. 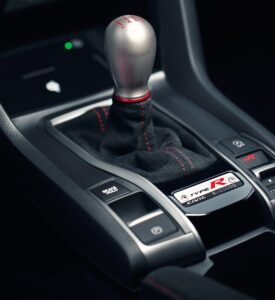 In the centre console you’ll discover a discreet switch that takes you from Comfort to Sport to R+.

The latest version has new two piece floating discs which give increased braking feel and bite,and revised engine mapping has smoothed out the turbocharged performance delivery. Changes to the suspension bushes have increased its rigidity, which in turn gives you the inspiration to push a little more. The handling is pin sharp and the grip is undoubtedly there, and so is the bark from the back from the triple exhaust pipes. The Rev Match System gives you an audible blip on downshifts.

And it’s at this point, with no track action booked, you go home, park it up, and contemplate the wisdom of spending just under 35k on a car that is fun, yes – enormous fun –  but has the potential for the washing machine to have to deal with another unexpected load.

One of my boys had a Type R a few moons ago, but I don’t remember it being as outright edgey as this one. Quick, but the 200hp then seemed altogether more controllable. But now? Well, the game has moved on to a different level and makes the latest Type R GT worthy of the cult following it has across the world.

And while the ride is firm, you could live with it every day, as long as you can resist the temptation to sink that right foot too often.