THREE is a very significant number for Volkswagen, and it doesn’t mean third time lucky – they definitely got things right twice before with the Beetle and the Golf.

The new ID.3 heralds the beginning of the third major chapter in the history of the German marque, their first purpose built electric vehicle developed from the ground up for zero emission motoring.

And as it’s been created from a blank sheet of paper, the end result is an interesting mix. It’s a car with a footprint the same as a Golf, but with a wheelbase and interior space to rival a Passat. Throw in a turning circle very similar to the up! city car and off the line acceleration that rivals the Golf GTI. Quite a mix of abilities, it has to be said.

The aim from Volkswagen is, by 2029, to have sold 20 million vehicles built on its all-new modular electric drive platform. If this is the way motoring is to go, then have no fears. 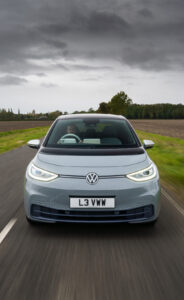 I’m more than happy to endorse it after a week with the ID.3. While there will be nothing to replace the sound of a lusty V8 going about its business, it’s not a crime to revel in the more sedate progress of an EV, where wind and tyre noise are your only companions. And occasionally Ken Bruce.

Actually, using the term ‘sedate progress’ is a bit misleading. Electric propulsion is instant propulsion, so if you need to you can hit the 62mph mark in not a lot over seven seconds, and while it tops out at 99mph that’s never going to be an issue. We’re not talking about breaking records here, more a case of doing something to break the stranglehold we have put on the environment.

It’ll mean a change for us all, with lots of little changes along the way. Little things like remembering the gear selector is on the right hand stalk behind the steering wheel, and that you really don’t have to do much other than unlock the car with the remote key and slip behind the wheel to find it is ready for business.

It’s designed to be simple to use with almost all functions operated by touch controls or via the “Hello ID” intelligent voice control, which allows you to talk to the car to control infotainment and climate functions.

The central touch screen might take a day or two to get your head round as there is a lot to take in and it does mean you have to take your eye of the road to perform tasks. Much better is the display ahead of you through the steering wheel  which is a model of clarity and simplicity in the information it gives you. 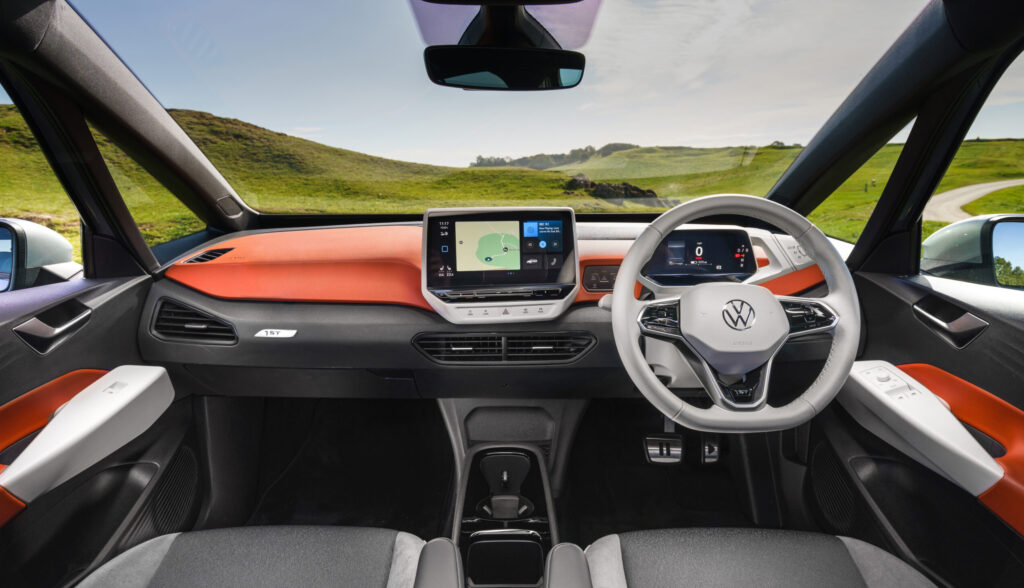 ID.3 is rear wheel drive, with the motor and gearbox (which have a combined weight of 90kgs) located on the rear axle. It handles pretty much like most hatchbacks, with steering that keeps you in touch with what the front wheels are up to.

As already mentioned interior space is more than acceptable, being in the Passat class, and behind the wheel there’s more than enough room to get comfortable for your journey.

Perhaps surprisingly it’s fitted with drum brakes at the rear, but its stopping power is mostly taken care of by the regenerative braking system. 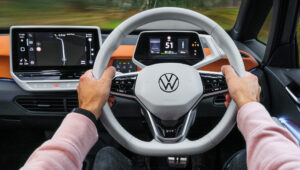 There are two regeneration modes and while retardation is good on the open road, you need to use the brake pedal around town.

It is, quite simply, a very enjoyable and user friendly car to drive. And with a claimed range of 260 miles on a full charge, there’s no need for the range anxiety that clouded earlier EVs.