LEXUS know a thing or two about electrified powertrains – just about every model in their range has one.

Now the NX – the best selling model in their range – has gone non-plug-in hybrid, giving you the benefit of a car that can run either on petrol or electric power depending on the traffic.

In town, it’s as quiet as Manchester City fans USED to be, only getting a bit shouty when you need to move quickly, and the electric CVT transmission begins to rapidly spin up.

The level of refinement is commendable, almost up there with a pure electric vehicle, but a better option for those of us who don’t have immediate access to a plug-in box at home. Not something you probably want to do at present with the staggering rise in the cost of electricity – unless you’re one of those who hogs the free charging points…..

I digress. The NX, with its 2.5 litre four cylinder engine is a superbly crafted package. Muscular on the outside with that whopping great ‘get out of my way’ Lexus grille and some sharp bodylines, it has a body that looks like it’s been chopped and shaped by someone wielding a Samurai sword.Lots of sharp cuts and angles give it a distinctive, purposeful presence, and one you’re not going to miss as it glides past. Certainly the most aggressive and mean looking car we’ve had on the drive for some time.

Which is kind of ironic, because in use it can be as docile as you like. In fact at times you have to drive it like a pensioner to get the best out of the available fuel and for the electric motor part of the equation to kick in. 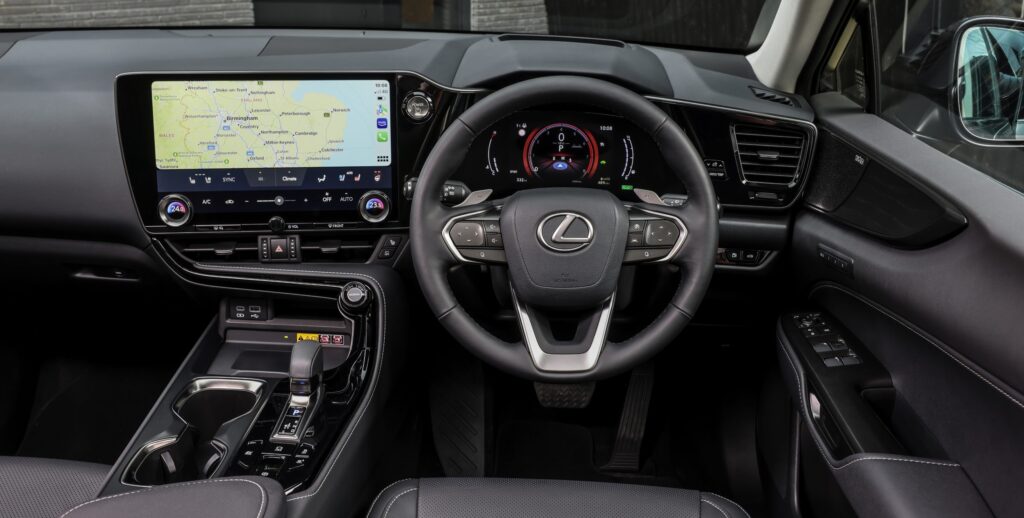 The interior is a bit of a contrast. Eveything sits close to hand and it’s crafted with the accent on comfort, the fit and finish is exemplary – quality leather, a huge central touchscreen and seats that adjust every which way set you up behind the wheel. Hard to fault, really, though the sweep back of the A pillar might catch unwary passengers out, as it is quite low when getting in and out.The electric CVT transmission is not my ‘go to’ transmission of choice. Coax any performance out of the car via your right foot and it sounds like it’s revving its Japanese (wheel) nuts off and you don’t get any sensation of it moving through the gears as you would in a conventional automatic. You can, however, use the paddles in the steering wheel as an alternative.

On the road, and motorway in particular, the NX proves super efficient and quiet, and on the twistier stuff it rides well too. The steering has a precise feel and there’s no vagueness evident in the way it feeds back to you what the wheels are doing.If you’re guessing this is a very well equipped car, you’d be right. 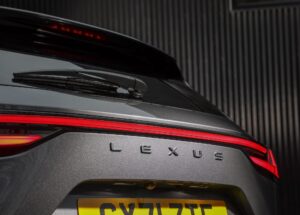 All the usual suspects can be found in the spec list like a wireless smartphone charging tray, drive mode select and rear cross traffic alert finding their way in there too. The latter scans right and left when you’re reversing out of a parking space, looking for other car park traffic and will warn you of potential collisions. Very handy bearing in mind the speed some fools drive at in confined car parks.

The spec levels are topped off by Takumi, which adds luxury features like a 17 speaker Mark Levinson stereo, 360 degree panoramic view monitor, a panoramic roof and automated parking.