MANY have tried, some have failed miserably, but the lucrative premium new car market has a new contender.

Genesis, a luxury offshoot of Hyundai, has lined up a range of decent looking vehicles to try and wrest sales from the likes of Audi, BMW and Mercedes-Benz, the acknowledged market leaders. 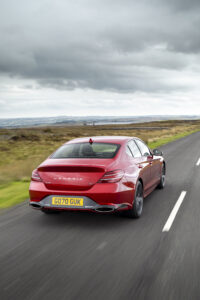 Genesis models have been on sale in the US and South Korea for the past 14 years or so, so it’s not their first attempt at making luxury cars.

And with a backing group (Kia/Hyundai) that has a pedigree of evolving rapidly from making cheap runabouts to very acceptable vehicles in all sectors of the market, there’s a lot of knowledge and expertise to draw on.

Obviously the challenge is not to be looked on as ‘just another Hyundai’ . Others have successfully made the break (SEAT/Cupra, Toyota/Lexus for example) and the new Genesis line up certainly looks capable to standing alone.

Here we have the G70 saloon, which to put it mildly is a lot of car for your money – £33,400 in Premium Line trim, and is aimed at the likes of Audi’s A4 an d the BMW 3 series.
While the cars are new to the UK and Europe, the choice of engines isn’t. Initially it’s either petrol or diesel, although hybrids and EVs are promised to be on the way from Korea before too long. 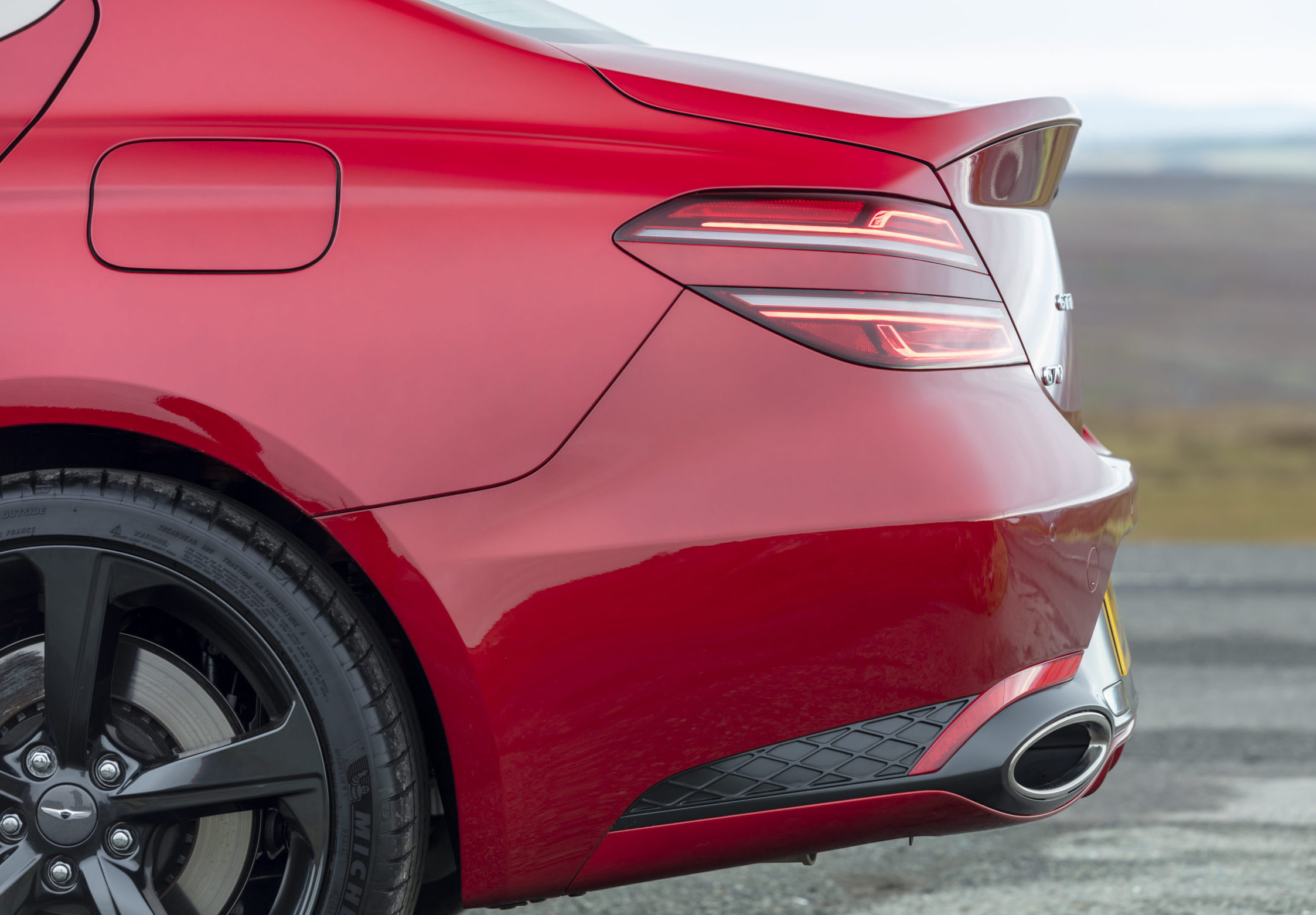 Looking at the sheer size of the rear wheel drive G70 you might think the 2.0 litre 16 valve petrol unit under the bonnet might prove a bit breathless. But none of it – through its in house developed eight-speed torque-converter automatic gearbox you’ll dispatch 62mph in a shade over six seconds and top out at 149mph. It feels fast and is, a feeling enhanced by the fact you’re sitting quite low to the ground.

Most Genesis models use the rear-wheel-drive platform that’s also found under Kia’s Stinger which immediately endows it with decent handling characteristics. It feels well balanced, and eerily quiet on a motorway run. But even then it was hard to get anywhere near the claimed economy figures, which was disappointing. 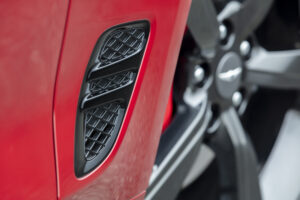 G70 is an imposing-looking car. Its low profile and big wheels that fill the arches giving it immediate presence, and its signature grille makes it look even wider than it actually is.
In addition to the exterior design, the interior is an important area where Genesis can score points. The seats are big, comfortable, and keep you well located when negotiating a twisty road.

Higher spec models get leather with contrasting piping, and overall the level of fit and finish deserves the thumbs up. Quality materials give it that premium look and feel. The rear is a little disappointing though, as legroom is not as good as you might expect. 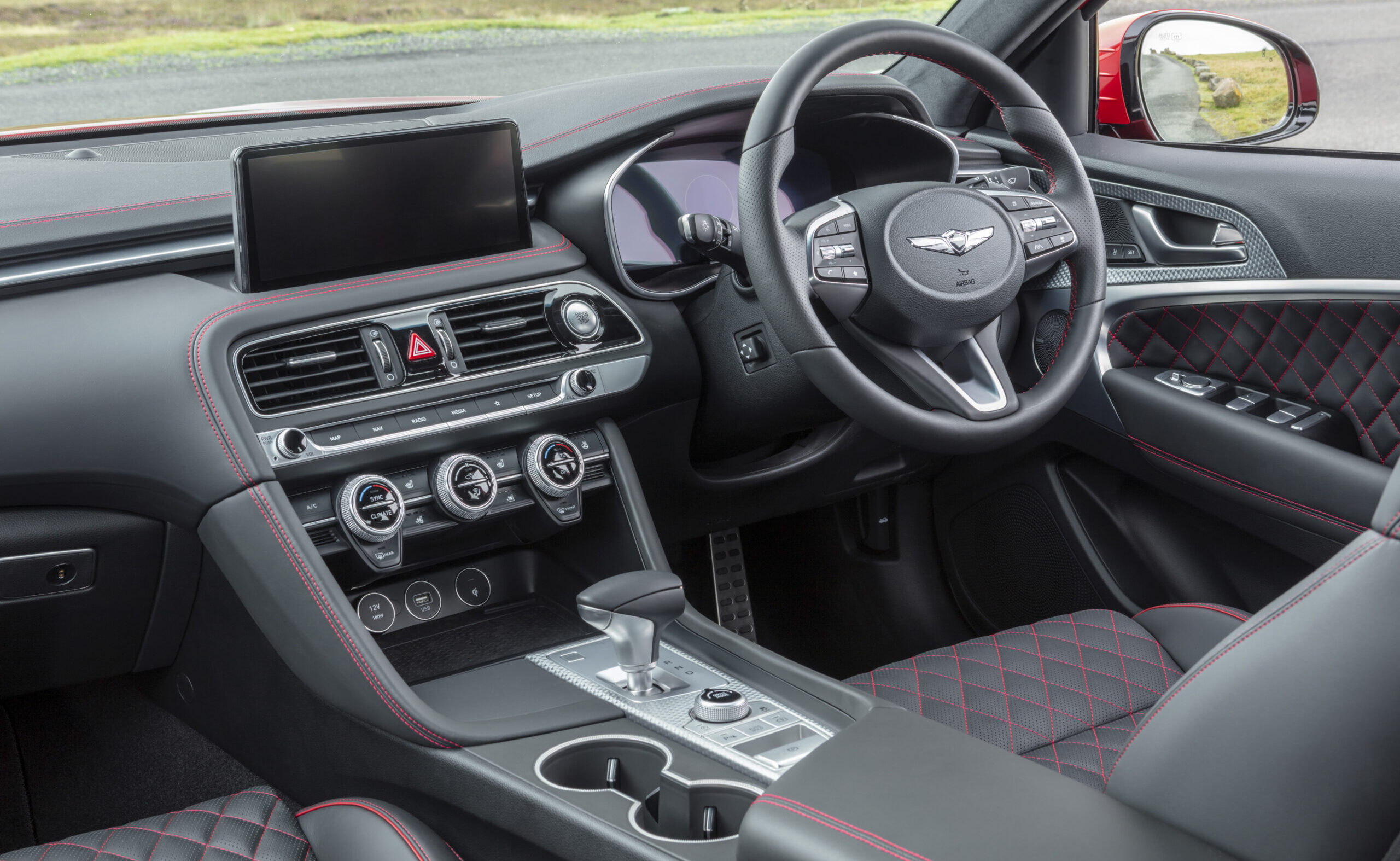 The head up display is in just the right place, the speed limit alert turning red if you exceed the limit at any point, and your manoeuvring vision will be helped by the ‘indicator cameras’ – the digital instrument cluster is linked to the blind spot monitoring system which can broadcast a video feed from either flank of the car when you put the indicators on, so you’re unlikely to clatter any errant cyclists on the nearside after you’ve passed them, and can easily see any other motorists looming on your right before you make your manoeuvre.
The middle of the dash houses a large touchscreen display.

One of the key lynchpins of the Genesis brand is the ownership experience, and you’ll get the same tailor-made package whichever model you buy.

Every customer is assigned an on-call personal assistant  who is with you throughout the purchase and ownership experience. When it’s time for a service, it’s picked up from you, sorted and then returned.