THERE’S very little chance of Toyota’s reputation for building decent hybrid powered cars getting a kicking with the latest C-HR.

They just seem to get better with each update and upgrade and from a drivers point of view the process is simplicity itself.

Toyota’s full hybrids are engineered to run on power from their petrol engine and their electric motor but they’re also capable of running on electric impetus alone – which is what makes a full hybrid different from other mild versions.

Part and parcel of the package is the knowledge that it will run on electric power as often as it can, which means fuel savings for you as well as lower exhaust emissions.

Those savings are evident when you switch off after a run, as the dash display will flash up how much of the journey you’ve completed on electric power, as well as the mpg achieved. It can, on occasions, be a bit of an eye opener.

You can see when the car is running on electricity when on the move as there’s a green EV icon in the instrument display.

Got to admit I’m not a great fan of the ‘elastic band’ electric CVT transmission, which is intrusively noisy under firm acceleration, but which settles down under more sedate progress and then becomes barely noticeable. So box ticked there.

On the styling front C-HR will be a marmite car to some – Transformers meets 21stcentury traffic.

It’s certainly shaken up the compact crossover market, simply because it doesn’t really look like one.

Toyota’s pensmiths have followed similar lines to Nissan’s Juke, but have created something that actually has a purpose about it, a sense of having a reason to be on the road and not just a piece of bulbous metal, the motoring equivalent of the Elephant Man. 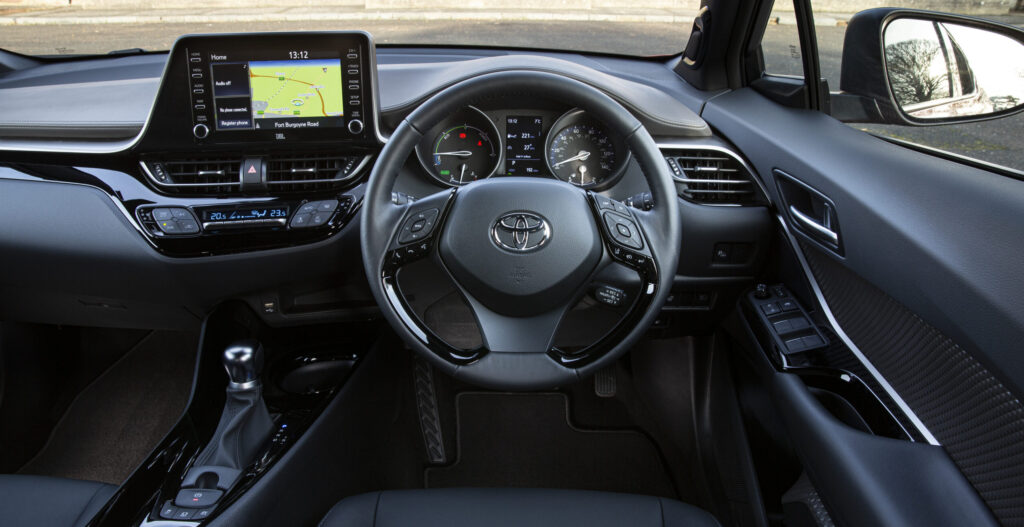 C-HR, by virtue of its swooping lines, sharp edges and big roof spoiler, has a refreshing style not very much in evidence when you look elsewhere, and it also manages to disguise the fact that what we have here is a car that is actually a pretty decent size yet still looks like it’s had a successful spell at Weightwatchers.

In the rear the windows narrow down towards the back, and you therefore don’t get the view you’ll enjoy in other crossovers, but the rear bench is low so headroom is ok.

If you’re up front there’s no problem. The dark rooflining and plastics make it a touch sombre but there’s no discernible shortage of space. In fact there’s loads of it and coupled with a really decent driving position, behind the wheel is a good place to be. The interior is top quality with its wrap round dashboard. 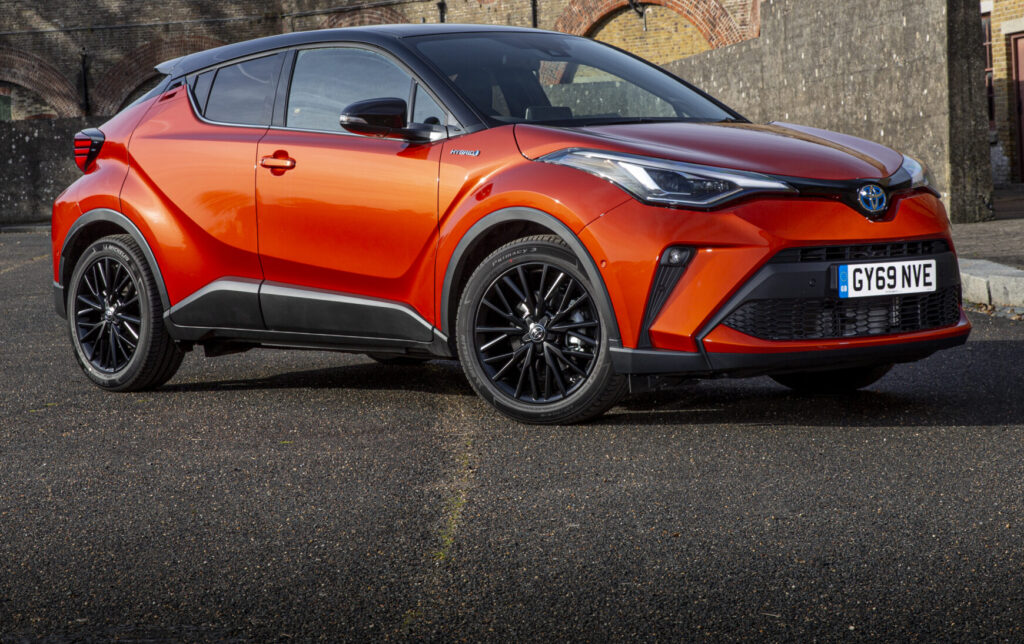 Standard kit on all models includes climate and cruise control, automatic lights and wipers; an auto dimming rear view mirror and touchscreen infotainment system which is set high, central, visible and easy to use; sat-nav; keyless entry; self parking and power fold mirrors, plus LED headlamps.