THE name will be know to many – it’s been around for a while – but now it’s very much a brand in its own right.

And one that’s on an upward spiral. The CUPRA name was first used back in 1996 on the SEAT Ibiza – and it’s a name that has grown in popularity with UK buyers.

Now, as a standalone brand after splitting from SEAT in 2018, CUPRA is viewed as an alternative premium brand. 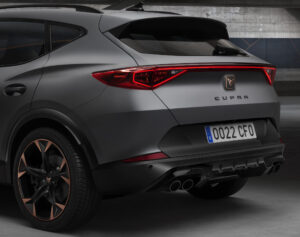 And the first of their ‘own’ models, after reworked and hotted up versions of the popular Ateca and Leon, has attracted higher sales than initially expected.

Formentor is a coupe SUV that looks like it means business. It majors on sharp lines to give it a distinctive, stand-out look, so well done Juan and all at the HQ design team.

Stylish, sporty and very well equipped, and as a bonus it’s practical enough for family use.

There’s still a heavy VW Group influence – you can’t miss it on the inside. But it’s given a different feel by the cunning use of copper/bronze coloured stitching and the big brand logo in the middle of the multi function steering wheel that houses the stop start and dynamic control buttons, cruise control and radio functions and the gear shift paddles. Even the black nappa leather seats in the VZ2 get neatly stitched CUPRA logos in the headrests.

Hard to miss is the big 12 inch sat nav screen, standard on all versions, and the equipment list extends to adaptive cruise control, LED lights all round, and a wireless phone charger.

If you like exhaust pipes there are plenty on this VZ2 version – two each side to be exact, from which a satisfying burble emits on start up.

The Formentor engine range gives you a fair choice. There’s the range topping 306bhp 2.0 litre petrol as well as two plug-in hybrids, a couple more 2.0 litre petrol models and an entry level 1.5 litre petrol which seems a bit at odds in a range that majors on performance, but it’s actually no slouch itself. 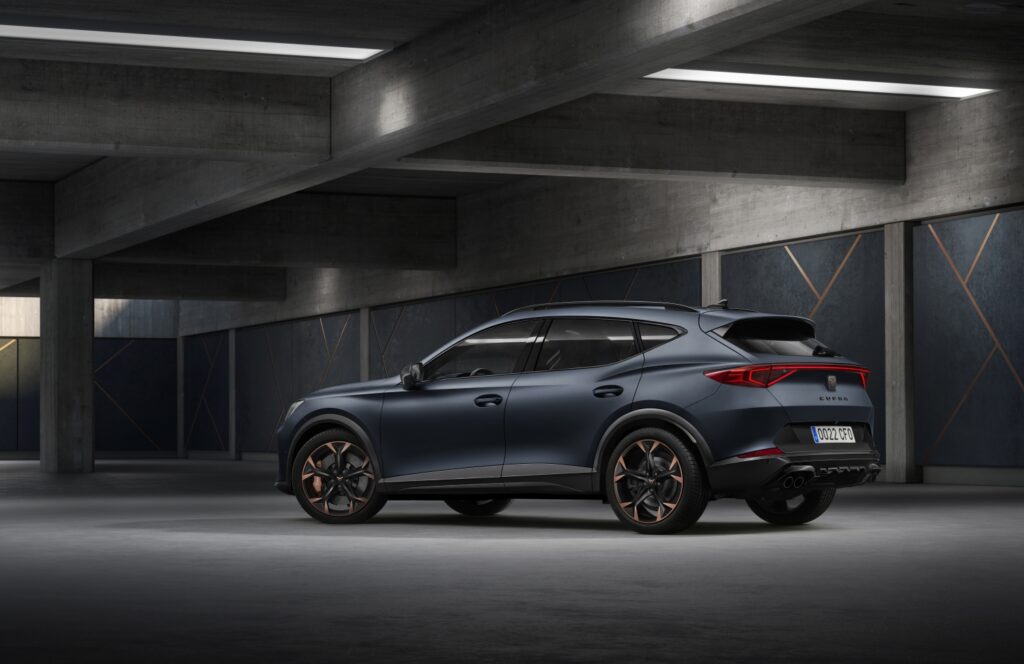 VZ versions – short for ‘veloz’, which if you speak Spanish means fast  – have the option of the 242bhp petrol and hybrid engines and the range-topping 306bhp engine, which is familiar from a range of hot VW Group products like the Volkswagen T-Roc R and Audi’s S3. With standard-fit four-wheel drive, the 0-62mph dash takes just just 4.9 seconds, and the top speed is 155mph.
With a lower roofline than Ateca, Formentor is a bit more restricted in the back but not majorly so and there is still a decent amount of room for occupants, as well as a healthy sized boot area.

With the steering and front wheels seemingly well connected the invitation is there to press on, and with very little body roll and a lot of grip, thanks to the 4Drive, Formentor can be a fine machine to undertake a cross country blast in. In fact, to undertake any kind of trip in.

The DSG gearbox is very user friendly with slick changes as you hit the accelerator, and still pretty smooth at lower speeds.

Formentor is CUPRA’s first move towards building an identity all of their own, and certainly worth a place on your premium shortlist.